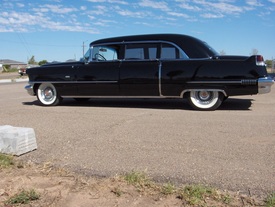 Judge Roy Hofheinz "The Judge" was bigger than Texas itself. His career began as a radio disc jockey while attending Rice University.  At 19, Hofheinz earned his law degree and at the young age of 24, became a Harris County judge. Later, Roy Hofheinz became the Mayor of Houston.

In addition to his work in politics and sports, Judge Roy Hofheinz was well known for his taste in cars.  A particular favorite of Hofheinz was his now classic 56 Cadillac Fleetwood 75 Series Limousine he used to drive around Houston. Once a fixture of the highways around town, it was lost long ago. Rediscovered rusting in an alleyway, the classic car has been restored to it's former glory and now the car looks as if it just drove out of the showroom for the first time.

Found in an alleyway

When John Painter discovered Judge Roy Hofheinz’ classic limo, the gas tank was sitting in the back seat, the hood and trunk were wide open, and the car seemed destined for the scrap heap. It was in terrible condition, but recognizing the significance of the vehicle, Painter and his team set to work fixing the car up. It took them a while, but the blood, sweat, and tears they poured into the car have most certainly paid off.

The ‘56 Cadillac Fleetwood was one of the most popular of all cars produced in the post-WWII era. This classic vehicle features seating for nine, has a wheelbase of 150 inches, and bumper to bumper, the Cadillac Fleetwood measures 236 inches. It weighs just over 5400 pounds, and it's hydra-matic transmission coupled with the 365 cubic inch V8 engine gives it a solid 285 horsepower to cruise on down the road.

While powerful for its day, it was the comfort features that made the Cadillac Fleetwood a legend. The classic 56 Cadillac Fleetwood 75 Series Limo came with 4 cigar lighters, two electric clocks, heated seats, power windows, and a signal seeking radio with dual controls - including a rear passenger override of the driver's controls. It also had an automatic eye to dim the headlights effortlessly, and a powered window divider for those times when passengers wanted a little privacy.

The classic 56 Cadillac Fleetwood Limo was a remarkable vehicle and Judge Hofheinz loved driving this elegant beauty all over town. Its overhaul was no small feat. The restoration of the classic limo brought to mind those elegant and simpler times, when men and women, wearing furs and fedoras, would climb into the backseat to take a ride through town with "The Judge."

Today, the classic 56 Cadillac Fleetwood 75 Series Limo, once owned and driven by Judge Roy Hofheinz is on display at Bill's Backyard Classics in Amarillo, Texas. Lovingly cared for, this classic vehicle is part of Texas' history as much as it is a representation of America's automotive past. To say it's an honor to have this car in our collection is an understatement.

If you have questions about any of our classic vehicles or desire additional information, call us today at (806) 373-8194 or send us an email on Contact Us. As always, we invite you to stop by, take a look around, and enjoy our classic cars as much as we do. We are located at 5309 S Washington St in Amarillo, Texas and we look forward to seeing you.